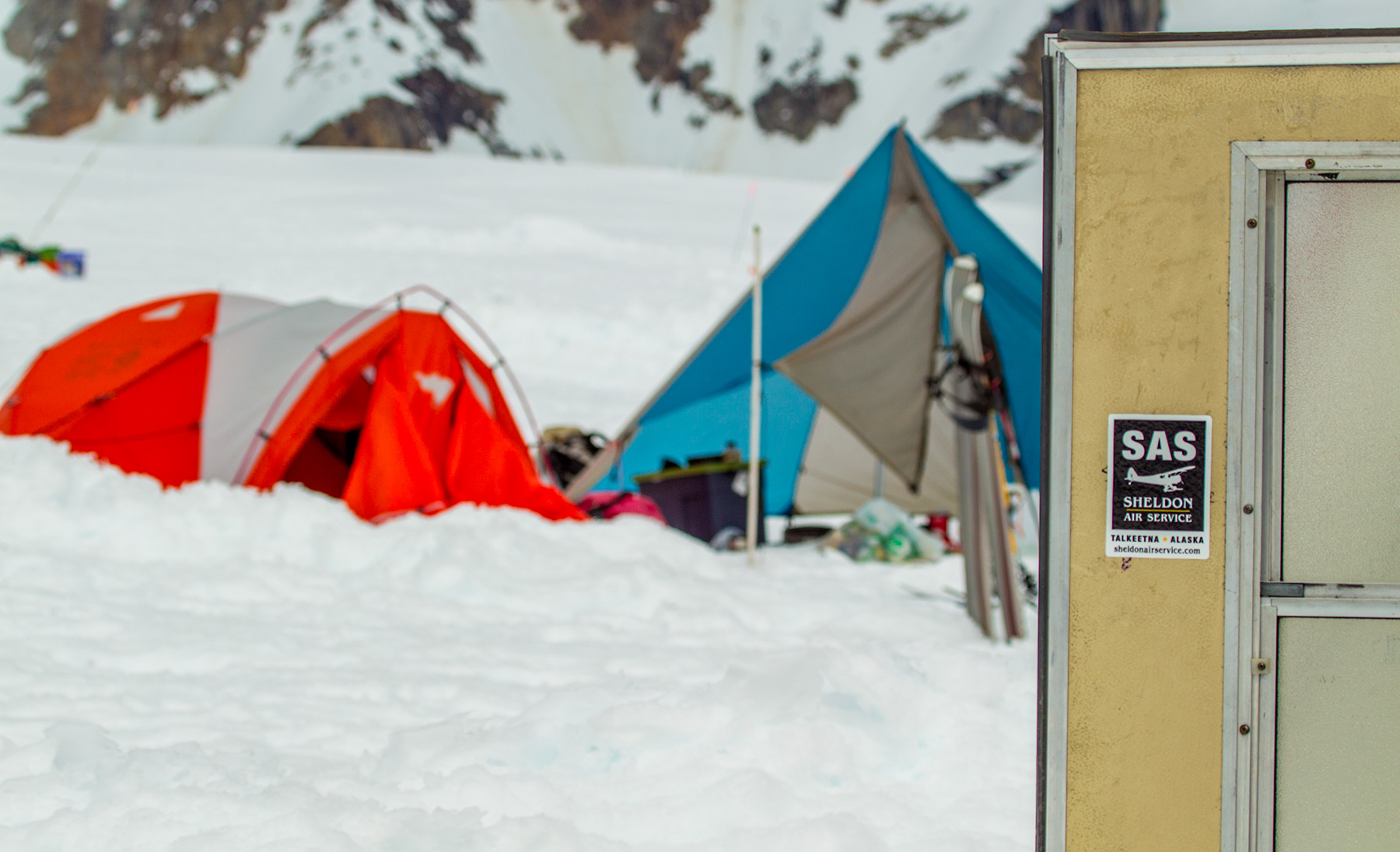 Robert Campbell (Bob) Reeve (March 27, 1902 - August 25, 1980) is best known as the founder of Reeve Aleutian Airways, but he had an extensive and colorful career in Alaska aviation, including development of the methods of landing on a mountain glacier.

In 1922 a picture of the aviator Carl Ben Eilson on the wall at the frat house at University of Wisconsin, Madison inspired Bob Reeve, to skip classes to spend time at Madison airfield, where Cash Chamberlain had a Curtiss Jenny. Six months short of graduation, all Reeve was expelled from the university. That only impelled Reeve farther into aviation.

Reeve headed to Florida, then to Beaumont, Texas where, in exchange for two months' work at the airfield, Bob got three hours flying instruction (which was called five) and soloed. When the Air Commerce Act of 1926 came into force, he attained one of the first Engine and Aircraft Mechanic's Licenses along with his Commercial Pilot's License.

In 1929 Pan Am teamed up with W. R. Grace and Company to bid for an airmail contract in South America. The new airline, Pan American-Grace Airways (Panagra) flew weekly airmail from the US to Lima, Peru via the Canal Zone. A Ford Trimotor was purchased and Reeve trained with the Ford Motor Company on these aircraft, delivering the first to Lima in August 1929. Panagra offered Reeve the chance to fly Airmail Route 9 from Lima to Santiago, Chile, at this time the longest aviation route in the world at 1,900 miles (3,100 km). In 1930 the route was extended to Montevideo, Uruguay. During this time Reeve learned about bush flying, developing techniques to avoid coastal fog which would later serve him in Alaska and mountain flying skills. He established a speed record between Santiago and Lima, covering the 1,900 miles in 20 hours.

Reeve stowed away on a steamship, arriving in Valdez, Alaska with $2 in his pocket. At Valdez airfield, Owen Meals had a wrecked Eaglerock aircraft with a Wright J-5 engine that had been a spare for Sir Hubert Wilkins when he made his flight across the North Pole to Spitsbergen.

Reeve worked for a month at $1 an hour repairing the plane, and then leased it from Meals at $10 an hour. Reeve was in business. His first charter was to Middleton Island, where the beach looked fine to land on, but the aircraft sank up to its wheels in the soft sand. An old block and tackle was found and used to rescue the aircraft from the incoming tide. Reeve managed to take off, and attempted to fly back to Valdez, but was forced to land at Seward owing to a storm. When he eventually got back to Valdez his tanks were almost empty, and he hadn't earned a cent. Reeve said this trip was worth $1,000 in experience. Reeve quickly learned that the bush pilot's biggest worry was paying for gas, which could be $.25 a gallon in one place, and $1.50 in another.

That winter, Reeve was hired to fly supplies to Chisana. Oil in the aircraft engines had to be drained each night, and warmed up on a stove each morning before being returned to the engine, as it was so cold that the oil would freeze. Reeve made a $2,000 profit on the Chisana route and had heard of a Fairchild 51 for sale in Fairbanks. This was the type of aircraft he had used in the Andes. He bought it for $3,500, with $1,500 down and the balance within two years.

In January 1937 Reeve received a letter from Bradford Washburn asking if he could fly a party of climbers to the glacier at the base of Mount Lucania in Canada. Reeve agreed to undertake the task. In April, the bulk of the supplies were flown in. When he flew Washburn and Robert Bates to the site, the weather had turned unseasonably warm and the plane sank up to its belly in slush. It was over a week before Reeve could take off, after the temperature had dropped sufficiently for a crust of ice to form over the slush. The trip was described by Reeve as the "most hazardous" of his career, but he had set a new world record of 8,750 feet for the highest landing on skis, more than 1,800 feet higher than any in either the Arctic or Antarctic.

In April 1941, Reeve was one of a few pilots in Alaska without a certified route, and was hired by the CAA to survey the many new airfields planned to be built as part of Hap Arnold's master plan for Alaska's defense. Whilst the Army and Navy concentrated on building bases at Anchorage and in the Aleutian Islands, the CAA was responsible for constructing the airfields in the interior.

The first to be built was the airfield at Northway, 100 miles east of Fairbanks. The contractors were the Morrison-Knudsen company (M-K). Supplies were trucked via the Richardson Highway and a summer trail to the Nasbena Mines, 60 miles from the airfield site, and then flown by Reeve to Northway, where an airstrip had been hacked out of the woods. Some items had to be cut into two or three pieces and re-welded at the destination as they were too big or heavy for the Fairchild.

Although Reeve was working from dawn to dusk, he couldn't keep up with demand for supplies at Northway, and a backlog built up at Nabesna. M-K ordered a Boeing 80A and Reeve was sent to Seattle to collect it. It took five weeks to modify the plane, and when he returned with it to Northway, found a 3,000 feet runway at what was now Reeve Field. The 80A was designed to haul 4,000 pounds but Reeve soon found he could haul 7,000 pounds in it. Reeve was again flying from dawn to dusk, sometimes on only two engines.

With the money earned from the CAA contract, Reeve ordered three more aircraft. He bought another Boeing 80A, a Hamilton Metalplane and another Fairchild 71. The army wanted him to survey a route for a railroad from Prince George, BC, to Nome. Reeve took the surveyors along the route but on the return trip the aircraft - a Fairchild - broke through the ice on Kluane Lake. The aircraft was abandoned but the mission successfully completed. The pass was named Reeve Pass. It is located between Francis Lake and the Salmon River. The Fairchild was left at Burwash Landing, and Reeve hired a pilot to fly the Hamilton from Washington to Alaska. The plane crashed in Washington, killing the pilot and Reeve was broke again, not having enough money even to buy the fuel to fly the Boeing to Alaska. He managed to borrow money from the Pacific National Bank despite them having a rule never to lend to bush pilots.

Reeve flew back to Juneau unannounced, and was almost shot down because he didn't identify himself. He returned to working for the CAA, now earning $80 an hour, with fuel provided, flying supplies, materials and workers to the new airfields being constructed at Big Delta, Tanacross, Galena, Moses Point and Nome, doing all the flying and maintenance himself and regularly working 15 hour days. In November 1942 Reeve signed a contract with the Alaska Communications System (ACS) and moved his family to Anchorage. The contract with ACS involved flying all over Alaska, the Aleutians and western Canada.

In 1946, Reeve formed Reeve Aleutian Airways and was its President until his death in 1980.

A strike by sailors on steamships operating between Seattle and Anchorage started on April 6, 1946. Reeve, along with Merritt Boyle and Bill Borland began flying between Seattle and Anchorage, with stops at Juneau, Yakutat or Annette Island. Each trip carried a full load of 21 passengers and took an average of 9 hours. In 53 days, 26 round trips were made. Reeve would work all night on inspections and maintenance of the plane whilst at Spokane, and then fly back to Anchorage having had very little sleep. Reeve earned $93,000 from this activity, enough to pay for the DC-3 and buy three more.

On March 24, 1947, Reeve Aleutian Airways was incorporated. The company was running scheduled and charter services all over Alaska. About this time, Reeve was ordered to get authorization to use the wartime Chain bases he was using. Reeve flew to Washington and leased Dutch Harbor field and acquired landing permits for Kodiak, Adak and Attu.

In April 1948, Reeve Aleutian Airways was granted a temporary, five-year airline certificate. With the need to run the business on proper business lines (maintain an office, publish schedules and tariffs etc.), the Beechcraft and Electra were traded in for two Sikorsky S-43 amphibians. In October 1948, Port Heiden was de-activated, followed by Dutch Harbor, Attu and Umnak. Reeve took over Umnak and conceded Attu, which was not vital to his operations. About this time, the Naval Air Transport Service began selling tickets to Adak in competition with Reeve. Reeve went to Washington and met with Louis Johnson, who granted all the business in the area to Reeve. In 1948, DC-3 N49363 was purchased from Arnold Air Service, Sikorsky S-43 N53294 and Grumman G-21 Goose N95468 was also purchased.

In 1952, the new Anchorage International Airport opened and all the other airlines moved there. The CAA was going to close Merrill Field, but it was retained for use by Reeve Aleutian and private operators. in 1953, final military deactivation of the Aleutian airfields occurred. Reeve obtained leases on Shemya and Cold Bay. Shemya closed in 1954 and all flights were switched to Cold Bay. In January 1957, DC-3 N49363 was sold to Twentieth Century Aircraft. During the 1950s, St. George and Chernofski were served by airdrop. Reeve installed salvaged bomb releases in his DC-3s to enable this.

By the mid 1950s, it was apparent that the DC-3s were not big enough for what Reeve Aleutian Airway's business had become. The DC-4 was selected to supplement the DC-3s, eventually replacing them. Reeve's first DC-4 was N63396, Purchased in March 1957 from Twentieth Century Airlines, which was going out of business. The first scheduled DC-4 flight was on March 12, 1957. The route was Anchorage-Kodiak-Cold Bay-Adak-Amchitka-Shemya-Attu.

The late 1960s saw the emergence of the Lockheed L-188 Electra, which was to become the backbone of Reeve Aleutian's business from then on. The first was N1968R (ex ZK-CLX of Air New Zealand) purchased from California Airmotive in February 1968.

In 1979, Reeve Aleutian started a service from Cold Bay to Seattle-Tacoma. This service lasted for three and a half years. During that time, only seven flights were cancelled due to weather and two due to mechanical reasons out of 458 scheduled flights.

In December 1983, Reeve Aleutian purchased two Boeing 727-22QC aircraft from Wien Air Alaska. They were N831RV "RCR" and N832RV "Tilly". During the Christmas 1985 holiday, there was a large backlog of mail at Seattle-Tacoma, and Reeve Aleutian contracted with the USPS to relieve the backlog.

The airline entered the 1990s on a relatively tight budget. In August 1999, Reeve Aleutian entered into a code-share agreement with Alaska Air on the route between Seattle, Anchorage and Petrovpavlosk and Yuzhno-Sakhalinsk.

Reeve received an honorary Doctor of Science degree at the University of Alaska in 1963. Reeve was named "Alaskan of the Year" in 1972 and inducted into the National Aviation Hall of Fame in 1975. He was made honorary Mayor of Shemya in 1978. He died on August 25, 1980 and in that year was inducted into the International Aerospace Hall of Fame. The Alaska Aviation Heritage Museum inducted Reeve into the Alaska Aviation Pioneer Hall of Fame on February 25, 2005. The Bob Reeve High School in Adak, Alaska was named after him.